Minister of Culture, Sports and Tourism Nguyen Van Hung stressed the need to define and practice a value system for Vietnamese people with virtues suitable to modern times. 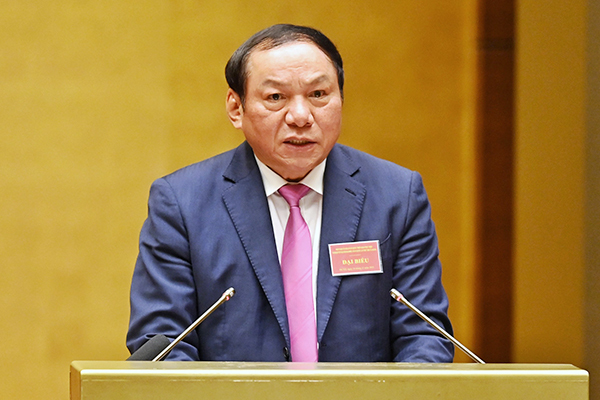 Speaking at the National Cultural Conference to implement the 13th National Party Congress’ Resolution on November 24, Hung said the conference shows the deep concern of the Party and State in cultural development.

Vietnamese culture after 35 years of doi moi (renovation) has an awareness of culture, society and the people. Ideology, ethics and lifestyle are the key areas of culture that have seen positive changes.

Practice has proven that when the country faces difficulties, the nation’s good cultural values are aroused and strongly promoted; patriotism, the spirit of mutual affection and mutual love, and meaningful living imbued with Vietnamese cultural identity shine even more brightly. The whole nation is united in will and actions.

However, according to the Minister, in the face of increasingly high requirements of development, the cultural sector still reveals a number of shortcomings and inadequacies. Mediocre, permissive and market-oriented cultural phenomena, as well as deviant cultural manifestations, have appeared.

The cultural environment, social ethics, business ethics, professional responsibility, codes of conduct, and public civility have not been built in a cultured manner.

The cultural and spiritual life in some places is still one dimensional; the gap in cultural enjoyment is still wide; there have not been many high-value literary and artistic works. The preservation and promotion of cultural heritage values is still facing difficulties.

The 13th National Party Congress has pointed out the key task which is “arousing the aspiration to develop a prosperous and happy country; promoting Vietnamese cultural values and human strength in the cause of national construction and defense, and global integration”.

Culture is present at diverse levels. Different cultures will have different ways to achieve different goals in cultural development strategies.

But there is a common aspect on the world cultural map, that is, countries converting cultural resources into soft power well in connection with other development pillars are always countries with a strong cultural background for development and global integration. They have the ability to respond flexibly and effectively to traditional and non-traditional security challenges.

Hung said that in the process of realizing the goal of developing an advanced culture imbued with national identity, Vietnam is facing challenges.

But these challenges are also motivation to find logical connections between abundant cultural resources and high political will, and to choose feasible strategic solutions to turn culture into an endogenous force, and a driving force to arouse the aspiration to build a more beautiful and powerful country.

The leader of the Ministry of Culture, Sports and Tourism asked the Party and State to give support to the culture sector to successfully implement some tasks.

These include the implementation of the strategy on Vietnam’s culture development by 2030 with three pillars – investment promotion, innovation and institutional breakthrough to promote the role of a cultural pillar associated with economic, political and social pillars towards sustainable development.

Attaching much importance to innovation to encourage and fully promote cultural resources and the creative capacity of all people, especially the creativity of artists so as to have more and more high-value cultural, literary and art works.

Giving advice and proposing regulations in the direction of linking culture with economic, political and social development is the fundamental solution to form an ecosystem capable of promoting the diversity of cultural expressions, creating proactive cooperation and promoting advanced cultural values imbued with Vietnam’s national identity to the world in order to increase cultural soft power, and position a “national brand”.

Prioritizing to build culture in the political system, building a contingent of cadres and civil servants with good moral qualities, sense of respect for the law, and building culture in each village, hamlet, and neighborhood community.

When the task of building culture becomes permanent, the cultural foundation takes shape naturally and voluntarily in each community and in each person. The national value and identity will become a soft shield to eliminate the objectionable and non-cultural.

“Fragrant flowers will overwhelm weeds”: this is the most convincing expression of the endogenous power of culture.

It is also necessary to focus on improving Vietnamese people which can only be realized in and by culture. It is necessary to identify and practice the Vietnamese value system with qualities suitable to the requirements of the new era such as patriotism, compassion, love, honesty, solidarity, industriousness and creativity.

The other tasks include developing cultural industries to promote the soft power of Vietnamese culture, based on creativity, science and technology and intellectual copyright. It’s expected that revenue from cultural industries would make up 7 percent of GDP by 2030.

Noting that culture is a long-term investment for a better future, Hung suggested that the Party and State build a national program on cultural development. Training course on leadership and management for c...